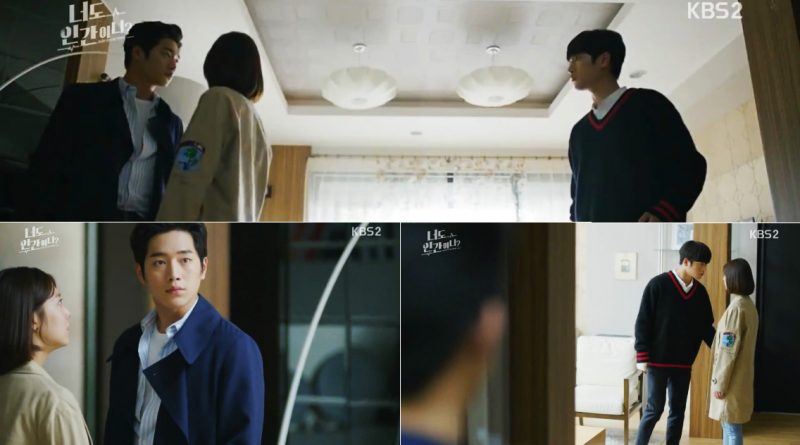 In the 25th and 26th episodes of drama ‘Are You Human Too’ that aired in 23rd of July tells a story of Nam Shin who make a use of Nam Shin III to test the loyalty and the true intention of Oh Lau Ra, his mother towards himself and the robot.

Oh Laura previously was asked by Nam Shin III who was ordered by Nam Shin “Am I not important at all to you? Am I really nothing to you” upon hearing this question, Oh Laura had to lie, “If you keep being like this, I will regret making you” she said. But Nam Shin III knew that Oh Laura was lying. Nam Shin III who understand Oh Laura’s heart said, “I know that the human Nam Shin is the most important for you. Don’t ever feel bad for raising me” he said. Upon hearing this, Oh Laura then said, “You, You’re even better than me who made you. Now please protect Kang So Bong. I’m really thankful to you for these past years” she said as she finally shreds a tears.

Then Kang So Bong went to visit human Nam Shin to ask the Nam Shin III whereabouts and Nam Shin said, “why don’t you like me? because I am a human?” he asked. Then later Kang So Bong who heard this responded, “I hate you because you aren’t like human” and this made the human Nam Shin angry and grabbed her arm.

Nam Shin III appeared in a perfect timing as he immediately pulled Kang So Bong away from Nam Shin’s grip. “I have to take you away from that person. Is this what you call Jealousy?” he asked. Now the robot Nam Shin III has turning into more humane and started to feel the emotions of human in his own way.