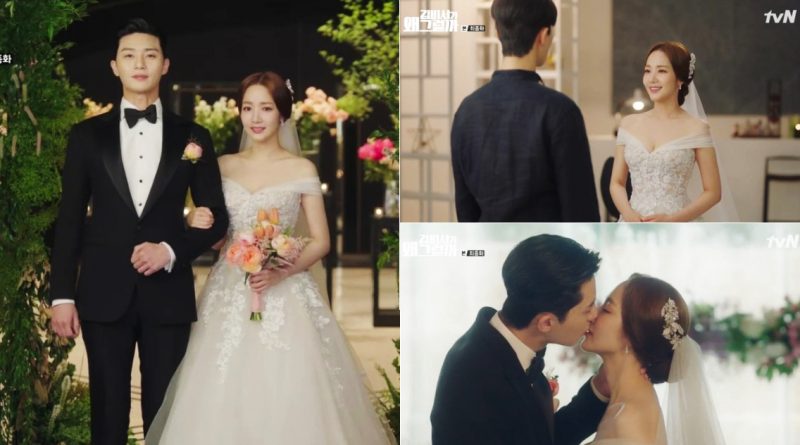 Lee Young Joon (Park Seo Joon) and Kim Mi So (Park Min Young) kissed each other with a happy ending in the 16th inning of drama tvN‘Why Secretary Kim’ that aired in 26th of July.

The last episode that aired yesterday is filled with the preparations of wedding between Lee Young Joon and Kim Mi So. Lee Young Joon that has sucessfuly proposed Kim Mi So with classic proposal decided to have their family meeting and to arranged their wedding ceremony. Since the meeting between the family is a little intense, Kim Mi So met Lee Young Joon’s mother and then she finally realized that her love for Young Joon is going stronger. Later, Lee Young Joon told Kim Mi So’s family that “I Will take care of Mi So” he said.

Lee Young Joon was realy excited to prepare his wedding with Kim Mi So as he chosed a perfect wedding dress for Kim Mi So but Kim Mi So couldn’t try on the outfit because she was busy with work that left Young Joon feeling disappointed.

The two of them finally got into an argument but eventually made up. Kim Mi So appeared in Lee Young Joon in the wedding dress that Young Joon has prepared for her and she then said to Young Joon, “I am sorry because of me you had to prepare the wedding alone” and when he saw the frown on Young Joon’s face, she told him “I like your sulky face, it’s cute”.

Lee young Joon then later said “Well I can’t miss my work either” as they two finally made up and decided on their honeymoon destinations while hoping that the time would flew faster. On their wedding ceremony, Lee Young Joon’s brother, Lee Sung Yeon who will be living abroad attended and he told him “I will wait for your next work” that signaling the peace between the two brothers.

The kisses between Lee Young Jon and Kim Mi So ended their story with happy ending. The kiss once again proved the strong chemistry between actor Park Seo Joon and actress Park Min Young.

April 1, 2018 Ria Comments Off on 5 Best OST Sung by The Star in Drama
BEAUTY Rank&Talk