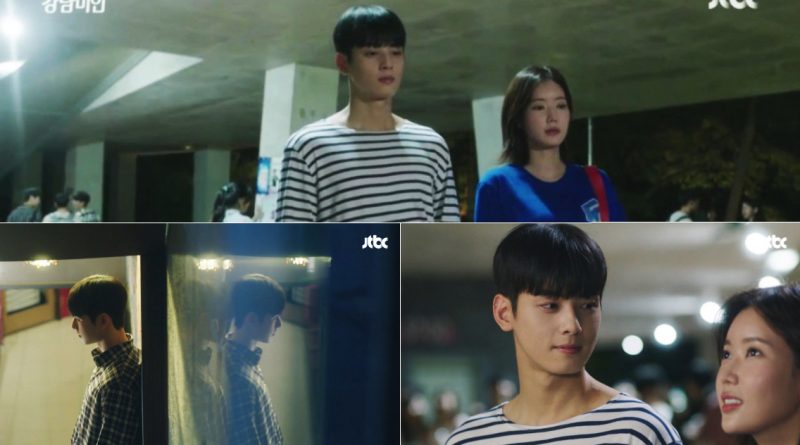 In the seventh inning of JTBC drama ‘My ID is Gangnam Beauty’ that aired in August 17th unveiled a story of Kang Mi Rae (Im Soo Hyang) and Do Kyung Suk (Cha Eun Woo) who have just become friend and made the viewers excited on the love affair between the two of them.

Mi Rae and Kyung Suk who were trapped in the classroom spent their time together. Kyung Suk then out of the blue remembered what happen in the chemistry class in the middle school and told Mi Rae, “You were so cool” he said then later adding, “We could be close if there’s no misunderstanding between us right?”. Mi Rae then told him that there are a lot of good looking people out there and Kyung Suk finally realized the reason why she was so hurt because she was called ugly back then.

After that, the two of them finally escaped the room thanks to the help of the senior who came to fix the door as they walking side by side in the campus. Kyung Suk then said “I don’t seem cold anymore. Now I have a friend” he said that made Mi Rae smiled in excitement. This is because Do Kyung Suk is Mi Rae’s first guy friend which she is unfamiliar with because she never had a guy friend. The two of them then standing side by side as they watch the fireworks as the sign of the end of the festival.

After the festival end, the next day the rumor about the history of Kyung Suk’s family has shook the whole chemistry department. It is reported that his father is parliament member Do sang Won and his mother is Na Hye Sung. Kyung Suk knew about the rumor through Soo Ah who showed him her phone and he realized that he is now the center of the rumor and that he had to apologize for the inconvenience. Soo Ah then told him, “I don’t have a mother too. That’s why I know how it feels to be exposed when you’re in the unfortunate condition” she told him.

September 22, 2017 Ria Comments Off on [RANK AND TALK] 5 Idols Who Are The Oldest Member In the Group But Look The Youngest “Maknae”
Rank&Talk STAR