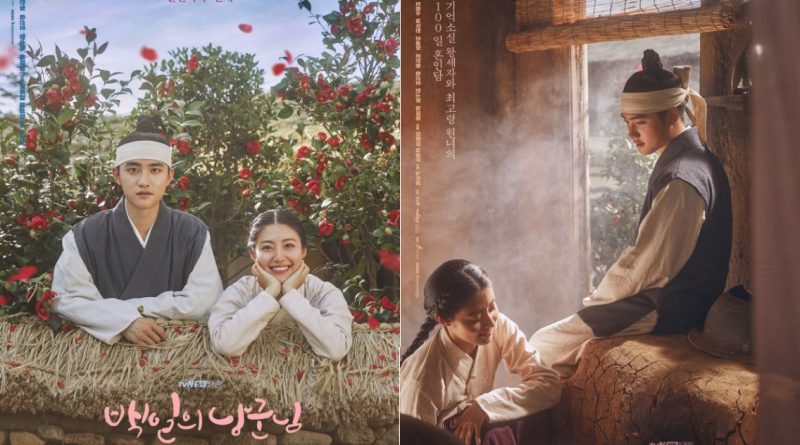 vN recently just released the two main posters for the drama ‘Hundred Days Husband’ which show off the perfect chemistry of Do Kyung Soo and Nam JI Hyun.

The main poster of the tvN newest drama ‘Hundred Days Husband’ showed the daily life of the crown prince named Won Deuk (Do Kyung Soo) who was kidnapped and lost his memories and a woman named Hong Shim (Nam Ji Hyun).

In the first poster, Won Deuk and Hong Shim were seen in the fences with the red camellia flowers. Won Deuk who is usually cold was seen leaning against the fences while showing a slightly and subtle smile. Hong Shim who is full of spirit was smiling widely. In the second poster, Won deuk and Hong Shim were seen like a very lovely newly weds. Hong Shim who is in front of the fireplace was trying to lit up the fire meanwhile Won Deuk who is next to her was staring at his wife with a warm gaze. In the second poster, the chemistry between the Do Kyung Soo and Nam Ji Hyun is indeed very perfect as they portrayed the lovely and warm relations of newly weds with the kitchen as the set.

Meanwhile drama ‘Hundred Days Husband’ is the drama that tells a 100 days story of the crown prince Lee Yeol who turned into a common people with the set of the Joseon dynasty. This tvN romantic comedy has an interesting story and also touching that is very anticipated by the viewers. This drama will air for the first time in September 10th in 9.30 pm to follow up ‘Let’s Eat 3’.

April 2, 2018 Ria Comments Off on 3 Places K-Drama Lover Must Visit While In Korea
Rank&Talk STAR