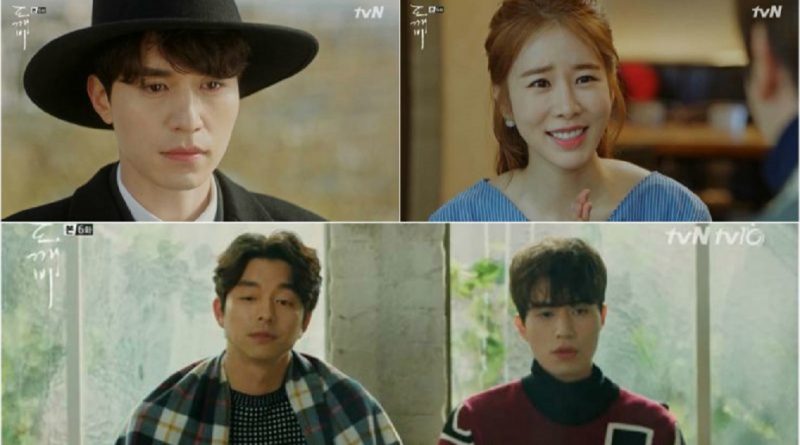 The 6th episode of ‘Goblin’ started with a scene of Kim Shin (Gong Yoo) and Ji Eun Tak (Kim Go Eun) after they were back from Canada.

In this scene, Kim Shin asked Eun Tak to pull out the sword in his chest. Kim Shin looked morose, and he even shed a tear, but the scene ended hilariously because of Eun Tak’s reaction, which was to ask Kim Shin back for something.

Meanwhile, Grim Reaper (Lee Dong Wook) finally meets Sunny (Yoo In Na) again. This time, Grim Reaper asked Deok Hwa (Yook Sung Jae) to accompany him. Sunny seemed more interested in Deok Hwa because of his status as a chaebol. Then, Grim Reaper introduced himself as ‘Kim Woo Bin’ to Sunny. However, he was ignored.

Seeing the unexpected situation, Grim Reaper ended up hypnotizing Deok Hwa, Sunny, and her friend. Soon, there were only Grim Reaper and Sunny left in the cafe. The Grim Reaper wanted to give the green ring back to Sunny, but Sunny refused and instead asked for Deok Hwa’s number.

Due to Eun Tak’s ability to see ghosts, a lot of spirits often asked her for help. A ghost grandma even told Eun Tak to ask Kim Shin for lottery number. Kim Shin then told Eun Tak the number to help the grandma.

Meawhile, Sunny was crossing the bridge where she met Grim Reaper for the first time when something strange occurred. It turned out that Grim Reaper was there, but he was invisible to Sunny. Sunny, who was trying to call Grim Reaper, suddenly heard a phone ringing in the middle of the bridge, where there was no one beside herself. Sunny slipped out of shock, and she was about to fall when suddenly something held her back. It was actually Grim Reaper helping her. However, because Sunny could not see him, the whole thing terrifies her and Sunny ran out of the bridge as fast as she could.

What do you think of this episode, readers?