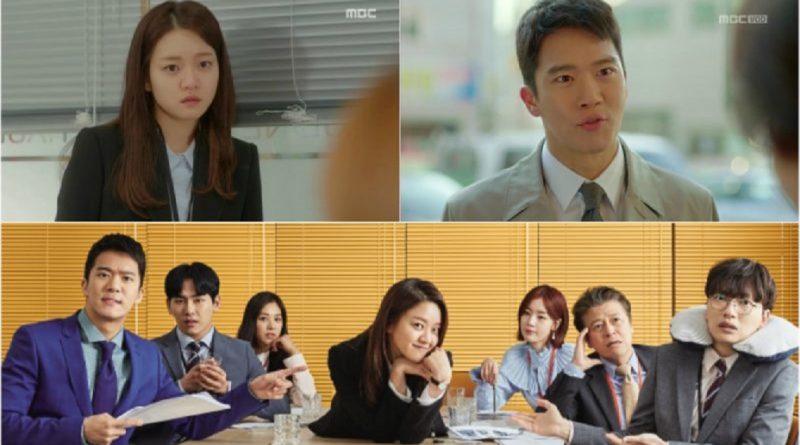 The viewer rating of this drama keeps on rising steadily. This drama started off with 3,8% rating and obtains 5,2% rating in its 4th episode, 5,4% in episode 5, and 6% in episode 6. Even though it is still a bit low if compared to the other drama airing at the same time as them, ‘Radiant Office’ keeps on gaining a rise in their rating.

This drama receives positive comments because it can bring the real sympathetic feeling to the audience. This drama tells the story of a woman who is preparing herself for a job interview and then portrays the problems that happened in the workplace.

Ho Won gets humiliated when she was in a job interview. After she gets accepted as a temporary worker, she is faced with various obstacles. However, she remains positive as she goes through the problems one by one.

Woo Jin (Ha Seok Jin) who is Ho Won’s boss treats people coldly. Even though when he is with Ho Won they are like a cat and a dog, bit by bit they become closer until the relationship between them slowly changed. In this drama, Seo Hyun (Kim Dong Wook) also becomes a fun character.

Since the beginning, Ho Won has found out that she doesn’t have that much of time, but it doesn’t make the drama feels gloomy. This drama is filled with various comedy aspects. Ho Won and Ki Taek (Lee Dong Hwi), Kang Ho (Lee Ho Won), and the others are several fun characters that make this drama feels light and entertaining.

Among the other office drama such as ‘Misaeng’, ‘Chief Kim’, and the others, ‘Radiant Office’ feels almost realistic which is why the public is attracted to it. This drama is showing something different which makes it more entertaining to watch.

Will ‘Radiant Office’ be able to continue rising? The audience of MBC’s Wed-Thu slot is curious to find out.