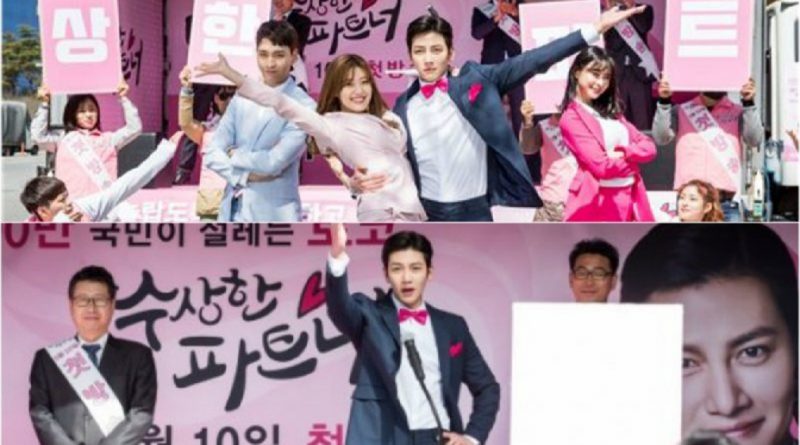 As a way to stir up more publication toward the drama, the team behind ‘Suspicious Partner’, starring Ji Chang Wook and Nam Ji Hyun, did a mock-up ‘election campaign’ several days ago.

On April 12, the main casts of ‘Suspicious Partner’ made an appearance in Yeouido, an area near the National Assembly office. Ji Chang Wook, who stars as No Ji Wook, sported a dark blue suit with red tie, while Nam Ji Hyun as the female lead Eun Bong Hee, Choi Tae Joon as Ji Eun Hyuk, and Nara as Cha Yoo Jung, each wore pink and blue outfits.

The filming lasted around 4 hours, with Ji Chang Wook delivering a speech announcing the air date of the drama, “On May 10, the day that will  change the history of Korea, a completely new drama, ‘Suspicious Partner’, will begin.”, followed by other casts dancing in front of citizens who were passing by on their way to work. The event attracted a lot of attention, and many people took out their phones to record it.

The production team said, “The casts practiced dancing really hard for the sake of filming this mock election in front of the National Assembly. They were greatly encouraged because the citizens loved it, and they were able to have fun together. Please wait a little while to see how this footage will be used and revealed, we will repay you with a surprising video.”

‘Suspicious Partner’ is a romantic comedy drama revolving around No Ji Wook, a prosecutor, and Eun Bong Hee, an intern in a law firm. This drama will have its premiere on May 10.

What do you think of this promotion strategy, readers?