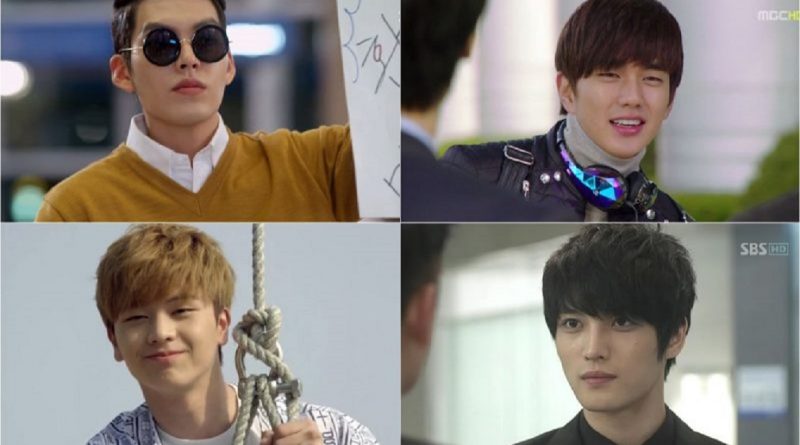 An antagonist in a drama or a film is not always evil. The antagonist is a role that is contrary to the main character. Usually, the antagonist character has a negative nature and makes viewers irritated. But some of the antagonists could make the audience sympathize with them. Cast Ko will reveal some figures who we think deserve the title of ‘beloved male antagonist’.

Kim Woo Bin, who debuted as a model, acted as the enemy of Kim Tan (Lee Min Ho) named Choi Young Do in ‘The Heirs’. This drama is the one that catapulted Kim Woo Bin’s name. How come? Although Choi Young Do is a troublemaker who uses his power to oppress others, he has his own heartbreaking reasons. Being a conglomerate child does not always make his life happy. As a high school student whose soul is still unstable, the only thing he needs is love. All the rebellion that Choi Young Do did were actually done get the attention of his father, who always seemed indifferent. Moreover, her mother escaped from the house because of his father’s womanizer attitude.

Choi Young Do and Kim Tan are actually close friends. But for some reasons, their friendship is broken. In the depths of Choi Young Do’s heart, he misses his friend. Then, Choi Young Do meets Cha Eun Sang (Park Shin Hye), a poor woman who changes his nature and makes his fall in love. Because of that woman, he turned into a better person. Kim Woo Bin is indeed the most suitable actor to portray Choi Young Do. Thanks to his skilled acting, many people fell in love with Choi Young Do instead of hating him.

Kang Hyung Jun emerges as a friendly and kind person, but turns out to be a psychopathic killer who uses the name of Harry Borison (Yoo Seung Ho) to have his revenge on Han Tae Joon, who has killed his mother. Harry has a lover named Lee Su Yeon (Yoo Eun Hye). He loves his girlfriend and is willing to do anything for her. Unfortunately, Lee Su Yeon has not fully given her feelings to Harry. The presence of Lee Su Yeon’s first love, Han Jung Woo (Park Yoo Chun), who works as a detective makes Harry doubt Lee Su Yeon. Then his love turns into an obsession. Furthermore, Han Jung Woo starts to suspect the various murders that were committed by Harry.

Many audiences sympathize with Harry’s past. Harry’s desire to be loved by his girlfriend is considered natural. He does not want to lose a loved one, but his way to make sure of it is wrong. Through Harry’s gaze, we can see his sincere love for Lee Su Yeon. Yoo Seung Ho successfully builds Harry’s image that seems to have multiple personalities. On one hand, we feel that Harry’s attitude is very sweet to Lee Su Yeon, but jealousy and revenge have turned him into a monster, making many viewers unwilling to accept Harry’s fate.

Gong Tae Kwang, who is portrayed by Yook Sung Jae in ‘School 2015’ is not a bad figure. His character is similar to Choi Young Do in ‘The Heirs’. Gong Tae Kwang is a high school student who often skips school and do rebellious things get attention. Gong Tae Kwang has a poor relationship with his father. He starts to change when he meets Lee Eun Bi (Kim So Hyun). Unfortunately, Lee Eun Bi already has feelings on Han Yi An (Nam Joo Hyuk).

Though Yook Sung Jae is not the main actor, he became the center of attention in this drama. His name soared thanks to ‘School 2015’. The uniqueness of his character is though he looks cool, he paid great attention to Lee Eun Bi. Gong Tae Kwang always helped Lee Eun Bi when she started to be bullied by her school friends. Yook Sung Jae manages to portray the figure of a sweet little boy, which made many viewers want a happy ending for Lee Eun Bi and Gong Tae Kwang.

This JYJ member acts as Cha Moo Won in the drama ‘Protect the Boss’. He is a conglomerate and prospective heir to a Korean company. Cha Moo Won is a submissive, intelligent, and reliable kid. But he is also a cunning and ambitious figure. Cha Moo Won even wants to destroy the career of his cousin, Cha Ji Heon (Ji Sung).

In some scenes, his feud with Cha Ji Heon is very adorable. His negative attitude is actually influenced by his mother, who wants Cha Moo Won to become the leader of the company. In the end, he becomes an ally who supports Cha Ji Heon. After that, his attitude becomes very sweet. His love story with Seo Na Yoon (Wang Ji Hye) is also adorable.