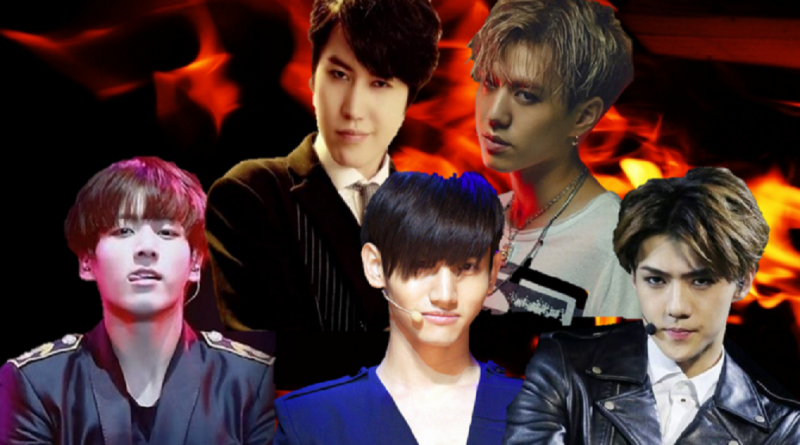 A maknae, or the youngest member of a group, usually has an innocent, adorable image. This, however does not apply to all idol groups in South Korea. In fact, there are several maknaes with opposite characters to the image above and are often referred as ‘evil maknae’. The evil maknae is usually not afraid to do evil things or to bully his hyungs with ingenuity and hilarious behavior. Here are 5 idols who belong to the category of evil maknae:

The maknae of Super Junior is famous for his sharp mouth. Some members are often the victims of his mouth, such as Yesung, who becomes his bully target because of his small hands, Heechul, which Kyuhyun considers disregarding his members because he hangs out with Hongki FT Island more than his own members, or Eunhyuk, whom according to Kyuhyun has stinky feet. The comments made by Kyuhyun often make other members speechless and unable to say anything other than laughing resignedly. Because of his talkativeness, many members are afraid to become Kyu’s next target. However, his behavior is indeed a supplementary to the group Super Junior.

Jungkook, the maknae of BTS, is often called as the Golden Maknae thanks to his extraordinary talent. He is good at singing, dancing, handsome, and he can imitate other members excellently. Jimin and Jin once said that they might be able to write a novel about Jungkook’s abnormal behavior. Jin, the oldest member of the group, was even defeated and ran out of words when playing Dangyunhaji / Of course game with Jung Kook. Other members such as Suga and V once said Jungkook is a disobedient maknae to his hyung, and they feel that Jungkook never regards them as hyungs. Jungkook’s behavior always makes other members upset and laugh at the same time.

Many people believe that Changmin the original evil maknae. Befriended by Kyuhyun, their nature is indeed very similar in terms of issuing scathing remarks. As the tallest and most famous member, Changmin succeeded in making his hyungs afraid of him. Former member Junsu is Changmin’s main target, who was not only attacked through words but also physical attacks. Though so, Changmin really loves Junsu, for example he once said “Hyung is my religion” while joking. Changmin’s hilarious and frightening behavior often leaves people unaware that he is the maknae in the group.

It seems that evil maknae is the trend among SM Entertainment groups. Sehun is the youngest member of EXO, with a height of 183 cm and a cold face. In contrast to his cool aura, Sehun is notoriously mischievous towards other EXO members. In a photo shoot, he accidentally stepped on Chen’s shoes and held DO’s buttocks. He also often proposes to play ‘Yaja Time’ in order to reverse the situation to become the oldest member, and to be rude to his hyung as a joke. Thanks to this ignorant behavior, he successfully stole the hearts of the noona.

Yugyeom often introduces himself as a maknae who does not look like a maknae. He also once said even though he is a maknae, he is not afraid of all his hyungs in GOT7. The main target of Yugyeom’s ignorance is Junior, but Yugyeom admits that he does it because he loves Junior, he even wants him as a roommate. In addition, Yugyeom is also the tallest member in Got7. Some of his hyungs often try to scold him, but he often gets out of the situation and turns things around. Fans are not surprised anymore with his rascal behavior.