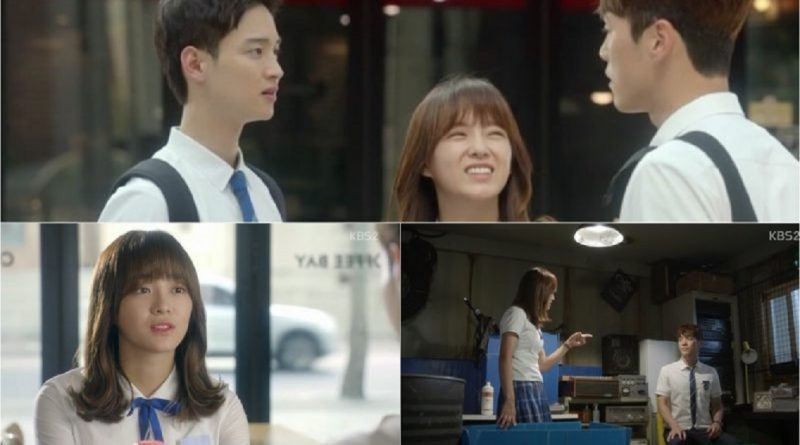 In KBS2 ‘School 2017’ Ra Eun Ho is a high school student who dreams of entering prestigious university in Korea through her ability in the webtoon. Unlike her expectations, Ra Eun Ho is often involved in accidents. But it adds to the atmosphere of the drama and the character becomes more cheerful and strong. She never gives up under any circumstances. This character is played by Kim Se Jung, a member of Gugudan.

In the recent episode, Ra Eun Ho was shocked to see Song Dae Hwi (Jang Dong Yoon), the smartest student in school and always ranked 1st trying to steal answers from the math competition at his school, from the beginning Ra Eun Ho had thought Song Dae Hwi Is X. Hyun Tae Woon (Kim Jung Hyun) the son of the school director becomes an X to fix the ‘damaged’ school rules. He follows Ra Eun Ho who is with his old friend Song Dae Hwi. His emotions deepened as he freely talked about his heart.

The principal gradually tries to touch the parents of students who cannot include their children to a prestigious university and the authority of a teacher is ignored. At that time, Hyun Tae Woon and X, spreading a video of himself in the headmaster’s room promising him to win a school math competition. Hyun Tae Woon shows his courage and Ra Eun Ho secretly helps him. At first, Hyun Tae Woon became X only for his personal pleasure, but then his role turned into something serious, he becomes a savior.

Kim Se Jung participates as a person who spreads justice with X. In each episode of ‘School 2017’, it is promised that the drama will provide a fun romantic comedy story from the students who feel alienated in school because of their scores, not because of their name. The drama airs every Monday and Tuesday at 10 pm on KBS2 TV.