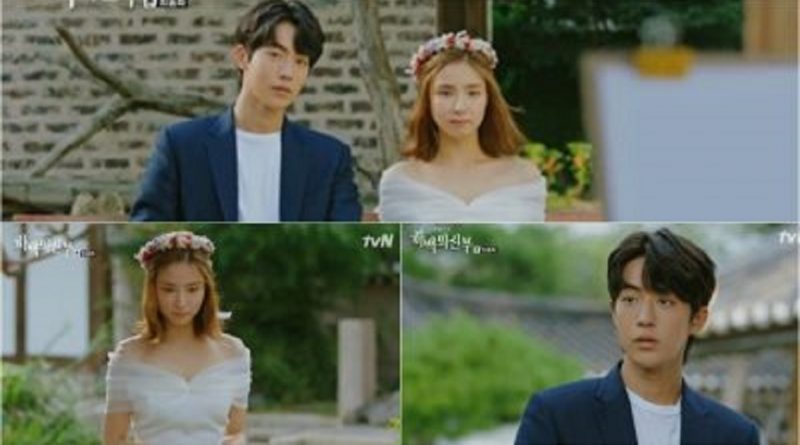 Since the beginning of production, ‘Bride of Water God’ has been compared with ‘Goblin’ in some aspects. The story of an ordinary woman’s romance with a god is similar to ‘Goblin’. That is the reason why this drama was often compared to ‘Goblin’. The drama indeed has left deep impression on the viewers.

Even so, ‘Bride of Water God’ reflects the modern era, expressing a realistic love life about the love story of people from the other world with humans.

At the beginning, the drama struggled and got critics from fans because of its lack of confidence. The actors’ acting looked stiff, the production and its story development are much different from the original version. Although there was some doubt in the beginning, the story continued to get a 3% and stable rating. The spin of is a bit different from the original work, yet later it attracted viewer’s attention and its story line became more meaningful.

The story is about Habaek and Yoon So Ah. There is a relationship between the god with his servants in the human world, but Yoon So Ah refuses to accept the situation. The romantic story between seemed to develop well, not too fast or too, and it started attracting viewers.

In the middle of the drama, their love story was getting sadder. Habaek had to leave the earth and return to his place, leaving Yoon So Ah the one he loves and separating in an improper way. Both people are always thinking about each other and attracting the attention of the viewers.

Their love story slowly developed and finally ended happily. Yoon So Ah’s request to continue with Habaek is granted and both live happily in the human world.

Meanwhile, the drama ‘Argon’ that willsubstitutee ‘Bride of Water God’ Argon will soon air. ‘Argon’ is a story depicting the fiercest life of journalists as well as the enthusiasm of expressing the truth through the facts that are flooded with false news. The drama stars Kim Joo Hyuk, Chun Woo Hee. September 4th premiered at 22:50 South Korean time.