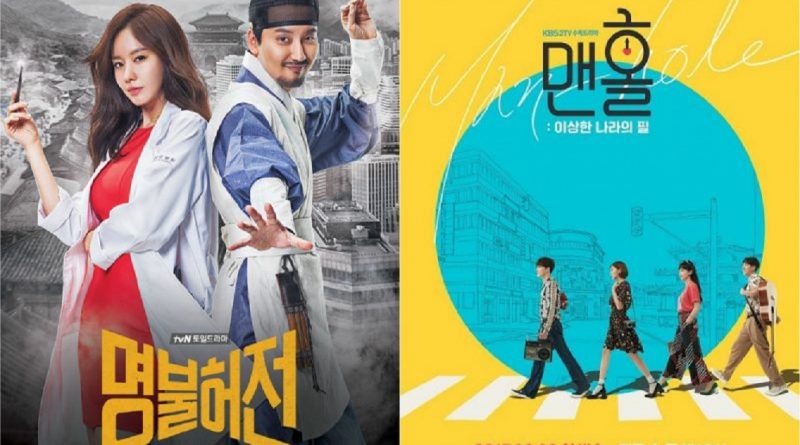 The two dramas, KBS2 ‘Manhole: Wonderland’s Pil’ and tvN ‘Live Up To Your Name’ have a similar theme which is a time slip, but the reactions are very different. The two dramas that are both being aired are a comedy drama where the main character performs time slips from the past into the present but there are many things that can be compared. In particular the drama ‘Live Up To Your Name’ receives a good rating on every episode, but the drama ‘Manhole’ received a low rating from the viewers.

Both are comedy dramas where the main character does a time travel in the same way, but why the reactions are so different? But when viewed more deeply, the results of these two dramas are very different.

‘Medical drama’ is a drama that ‘Will not fail if it’s good’. The story of Choi Yeon Kyung (Kim A Joong) a surgeon and Heo Im (Kim Nam Gil) an oriental treatment expert in the Joseon Dynasty, offers a different charm through each character and is fun to watch. The popularity of this drama has begun from the time-travel story that Heo Im has done to modern times coupled with comedy scenes, especially Kim Nam Gil who is earning praise for his comedic acting that continues even until now.

On the other hand, the drama ‘Manhole’ tells about the first love story in the 20s. Kim Jae Joong’s comedic acting is enough to invite the laughter of the viewers, but it’s too trivial to focus the attention of fans only with the romance drama of a young man without any dramatic events. If compared with Choi Min Su in MBC’s comedy drama ‘Man Who Dies to Live’, and the romantic story that Yeo Jin Goo shows in SBS’s ‘Reunited Worlds’ drama, Kim Jae Joong’s drama seems to be outclassed.

April 4, 2017 Tri Comments Off on The Stars Who Will Go to the Military This Year