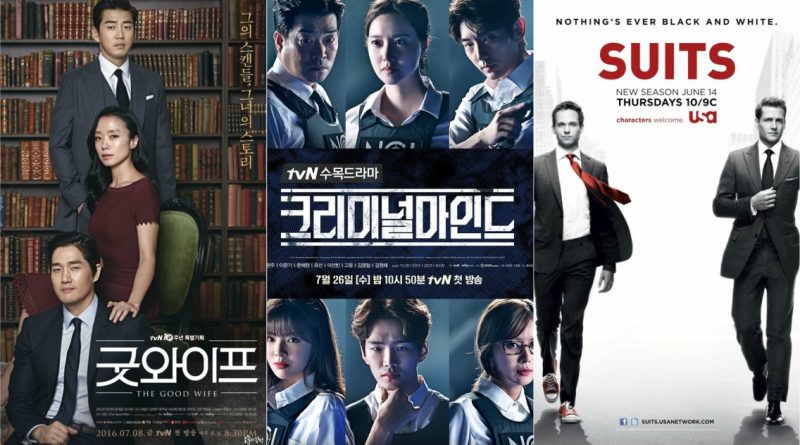 Starting from ‘The Good Wife’, ‘Criminal Minds’ to ‘Suits’, the dramas are remakes from American drama.

On September 22nd, KBS announced that Jang Dong Gun and Park Hyung Sik will star in the drama ‘Suits’ which is scheduled to air in the first half of 2018. ‘Suits’ is a popular drama series that has aired in 7 seasons in the United States. Another television remake drama appears after the tvN drama ‘Criminal Minds’ which is currently being aired.

The first American drama remake in Korea was ‘The Good Wife’ which aired last year. Followed by the drama ‘Entourage’, ‘Criminal Minds’, to ‘Suits’.In total, there have been 4 Korean dramas that are the remake of American dramas. Beside American dramas, there are many Japanese dramas that have been remade into Korean, such as MBC ‘Behind The White Tower’, KBS2 ‘The Queen of Office’ and Chinese remake drama, such as SBS ‘Moon Lovers: Scarlet Heart Ryeo’. Then, what is the reason for Korean dramas making remakes from American drama?

The biggest reason is the scale change of Korean drama market. In the past, drama was produced solely for domestic purposes but has now grown to a global scale as a result of the Korean wave. As the drama market grows, production costs increase through copyright sales that contribute to dramatic improvements in quality. American drama has a large scale so that it can easily get production costs to remake.

However, now the change is rather problematic. The demand from China which has been the biggest market since the Han Dynasty has declined.