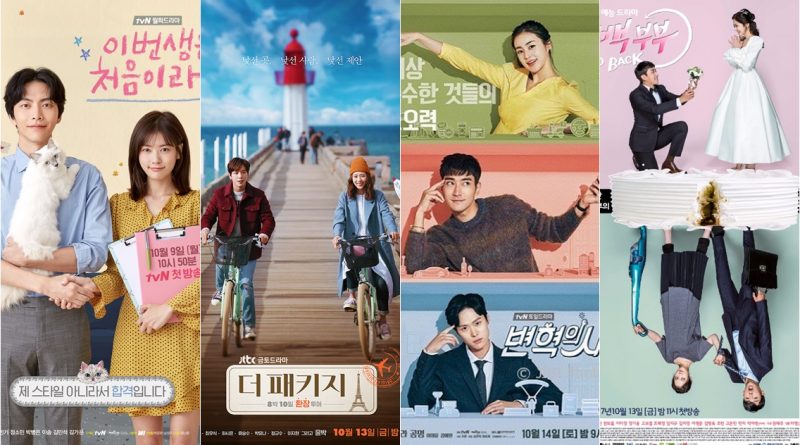 Rank&Talk
October 7, 2017 Ria Because This Is My First Live, Go Back Couple, RANK AND TALK, Revolutionary Love, The Package

New Korean dramas are coming up for this October. Drama is like a lifestyle that should not be missed. Its unique story and talented actors have become the main attraction. In this fall, romantic-comedy dramas are ready to dominate the screen. What are some of the most anticipated dramas this October? Let’s refer to the following reviews.

Starring Lee Min Ki and Jung So Min, this drama tells of a man and a woman who do not know each other but for a reason must live under the same roof. They want to avoid the talk of others about their age, which is supposed to get married already. Jung So Min who just finished the weekend drama ‘My Father is Strange’ will compete acting with Lee Min Ki. Both performances are highly anticipated. The drama will air on October 9th on tvN.

It’s been a while since Jung Yonghwa appeared on the screen. This fall, he will greet his fans through the romantic drama ‘The Package’ along with Lee Yeon Hee. The drama is set in Paris, France. Jung Yong Hwa plays the role of San Ma Roo who travels to France to mend his heartbreak, while Lee Yeon Hee acts as Yoon So So, a student who works as a tour guide and leads the traveler’s journey. The drama will air on October 13th on JTBC.

The drama that marks the return of Choi Siwon from the military is also highly anticipated. He acts as Byun Hyuk, a rich kid who tries to live a normal life. He has no purpose in life yet is very optimistic. His optimistic trait will annoy the people around him. Choi Siwon co-acts with Kang So Ra who plays Baek Joon, a woman with a high education but having economic difficulties. The drama starts airing on tvN on October 14th.

The drama starring Jang Nara who always looks young and Song Ho Joon. ‘Go Back Couple’ tells the story of a couple who married at a young age but regret their marriage and turn into hating each other. To save their marriage, the young couple decides to remember their youth and rediscover the faded love. The drama will air on October 13th.