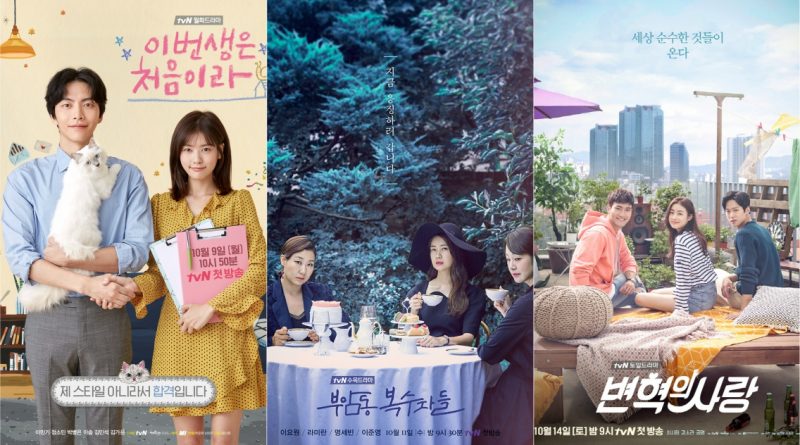 After the Chuseok holiday is over, the tvN dramas will begin airing for the first time after the golden week. Three tvN dramas will start broadcasting first in succession to replace previous dramas during the holiday season.

The first drama that will meet the audience is the drama “Because This Is My First Life” which will premiere on October 9th. ‘Because This is My First Life’ is a romantic drama that tells of Yoon Ji Ho (Jung So Min), a homeless woman living under the same roof with Nam Se Hee (Lee Min Ki), a pathetic house owner. The interesting thing about this drama is that it will show the fresh air of stories about love and marriage.

Meanwhile, Wednesday-Thursday drama ‘Avengers Social Club’ will air on October 11th. This drama recounts the struggle of living this life from a chaebol princess, a fish merchant in the market and a professor’s wife.

This drama is getting high attention because it starring Lee Yo Won, Ra Mi Ran, and Myung Se Bin. This drama has attracted the attention of viewers, and IT will replace the unsuccessful drama ‘Criminal Minds’.

On October 14th, ‘Revolutionary Love’ will be aired in place of the drama’ Live Up to Your Name’. Revolutionary Love is a comedy-drama that tells the story of three young men trying to change the world, Byun Hyuk (Choi Siwon) who is a chaebol, Baek Joon (Kang So Ra) who tries to fulfill her life needs by working, and Kwon Je Hoon (Gong Myung) who is an old friend of Bun Hyuk who has elite and best specs in Korea.

The chemistry and acting performances of Choi Siwon, Kang Sora, and Gong Myung in the drama ‘Revolutionary Love’ are highly-anticipated. Through this dram, Choi Siwon will showcase his transformation after coming out from military service.