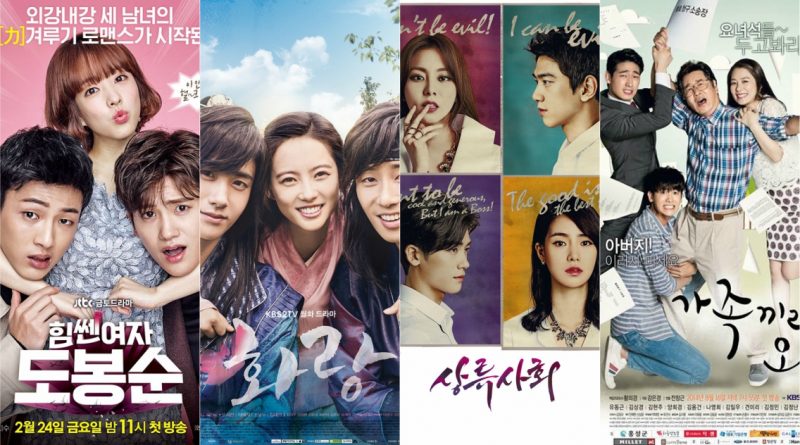 JTBC’s popular drama in 2017 ‘Strong Woman Do Bong Soon’ starring Do Bong Soon (Park Bo Young), An Min Hyuk (Park Hyung Sik), In Kook Doo (Ji Soo). This drama tells the story of Bong Soon who was born with a superhuman powers different from other humans and reveives hereditary strength which passed on only to the women in her family. One day, Bong-Soon helps a bus driver who is attacked by thugs. A man named Min Hyuk is played by Park Hyung-Sik driving to the scene of Bong Soon beating a group of thugs. Min Hyuk is a CEO of video game company Ainsoft and he has just received anonymous threats and even is followed by strangers. Min Hyuk believes Bong-Soon will be a great bodyguard for him with her amazing power. Detective Kook Doo lives in the same neighborhood and has been friends with Bong Soon since they were kids. Bong Soon has a crush on him, but he has a girlfriend. Kook Doo tries to solve the case which eventually makes Bong Soon and Min Hyuk also involve into the case.

KBS drama ‘Hwarang’ is a historical themed drama starring Moo Myung (Park Seo Joo), A Ro (Go Ara), Sam Maek Jong (Park Hyung Sik), Soo Ho Rang (Minho), and others. This drama describes and revolves around Hwarang which at that time Hwarang is a group of knights from the elite group of young men in the Silla kingdom who has more power in comparison with ordinary people. The knights of this elite Korean group has a very handsome face. They are also men who fight for love and passion and become a brilliant mandate. The setting of this drama is set in Seorabeol which is a very famous capital in the Silla dynasty some 1,500 years ago.

SBS drama ‘High Society’ aired in 2015 and starred Jang Yoon Ha (Uee), Choi Joon Gi (Sung Joon), Yoo Chang Soo (Park Hyung Sik), and others. The drama tells about Jang Yoon Ha who is the youngest daughter of the chaebol family. Despite her abundant wealth, she works part-time in a food market and hides her true identity as the heir because all she really wants is to find a man who will love her for herself instead of her money.Choi Joon Ki was raised in extreme poverty , and has a big memory in his mind about his poor parents who are underestimated. Yoo Chang Soo is also a chaeboli. He falls in love with his best friend Yoon Ha and Ji Yi, due to the fact that she ignores his wealth and status. He does not like being taken advantage of by people he considers an ally.

4. What Happens to My Family?

KBS drama ‘What Happens to My Family?’ aired in 2014, starring Cha Soon Bong (Yoo Dong Geun), Cha Gang Sim, Kim Tae Joo, ), Chal Dal Bong (Park Hyung Sik), Kwon Hyo Jin (Son Dam Bi), and others. This drama tells of a family that is chaotic and not harmonious. Cha Soon Bong is a widower who has devoted his life to his three children. He loves them even though they are selfish and disrespectful. However, when he discovers that he has cancer, he decides to use the time he has left to ensure their happiness when he leaves. Kang Shim’s eldest daughter, after a failed relationship and has resigned to never marry and live alone. his eldest son Kang-Jae, a brilliant oncologist who has entered a loveless marriage for profit. And his youngest son, Dal Bong is a drifter who claims that nothing seems to go right for him.