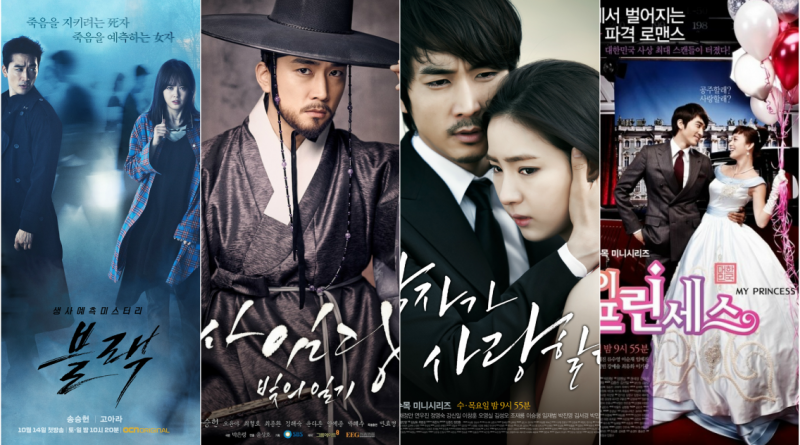 Song Seung Hon was born in Seoul, South Korea, on October 5th, 1976 (age 41 years). He is a South Korean model, actor and singer. He started his career as a model in 1995. He became a model of jeans branded STORM and started acting in several television dramas in 1996 that made him famous in Korea. This handsome actor appeared in his first film debut in the 1999 movie ‘CALLA’ along with artist Kim Hee Sun. In 2010, Song starred in the movie ‘THE INVINCIBLE’ made from the film ‘A BETTER TOMORROW’. Here are popular dramas starrring Song Seung Heon.

In this drama Song Seung Heon becomes the main character with Go Ah Ra. This drama tells of Black (Song Seung Heon), a detective whose body is inhabited by the Grim Reaper and Ha Ram (Go Ah Ra) who can see the shadows of death. These two struggle to save human lives, breaking the rules of heaven. This grim reaper story is erased from the memory of the world for breaking the rules of heaven and falling in love with a mortal woman after inhabiting the human body. ‘Black’ is OCN’s Saturday-Sunday drama replacing the drama ‘Save Me’.

Saimdang, Lights Diary tells of a reinterpretation of Saimdang from Joseon times. He is a genius artist and passionate lover. Lee Young Ae takes two roles; Seo Ji Yoon, a college professor specializing in Korean Art History and Shin Saimdang. Meanwhile, Lee Gyum (played by Song Seung Heon) is a man who possesses the first set of encounters with Saimdang in his youth.

The drama tells the story of Han Tae Sang (Song Seung Heon) who is a former gangster, but now a successful businessman. He has a cold blood and a tremendous boost. It helps him to achieve his current status, when he starts without anything. He then meets a young woman named Seo Mi Do (Shin Se Kyung). Her personality reminds him of himself at his age. Han Tae Sang starts to feel love for the first time in his life.

In short, this drama tells of Lee Seol who is an ordinary student, but her life instantly changed when she found out that she is a daughter of a Korean monarchy that has been extinct for a long time. The Korean president then commissioned Park Hae Young a diplomat to become the princess’s tutor. Hae Young opposed restoration of monarchy in Korea because that means he will lose his legacy. This is because Hae Young’s grandfather is the pioneer of the restoration plan and intended to give all his wealth to the public after Lee Seol is officially becomes the princess. Later, Hae Young begins to fall in love with the princess and vice versa and they must be faced with a difficult choice.