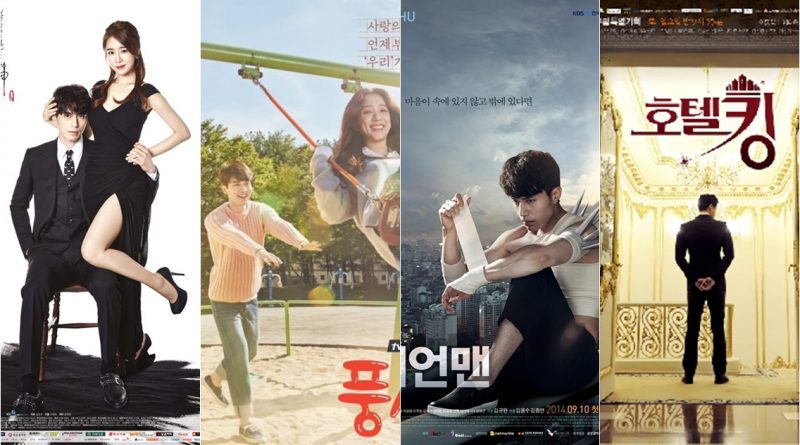 Lee Dong Wook’s name has skyrocketed since the drama ‘Goblin’. He managed to portray the death angel named Kim Woo Bin as well as a friend of Kim Shin played by Gong Yoo. Hus stunning acting with a mysterious and funny style managed to steal the show. He has been named the best actor of South Korea after playing in ‘My Girl’, ‘La Dolce Vita’ and ‘Scent of Woman’. The man was born in November 6 in Seoul and debuted in 1999 through small roles. He has starred in various dramas with Lee Da Hae, Lee Joon Ki, and Park Si Yeon and raised his name to be one of the Hallyu stars.

This drama tells about Kim Shin, a warlord from Goryeo in the days of the empire first. Kim Shin’s boldness makes Goryeo’s young king Wang Yeo feel jealous that Kim Shin’s position is more respected by his people. Wang Yeo is also the husband of Kim Sun (sister of Kim Shin). And this situation makes Kim Sun dilemma whether to side with her husband or his brother. Finally, this hatred Wang Yeo had makes him have a bad plan for Kim Shin. Kim Shin was stabbed with a sword by his own king and exiled. Apparently, Kim Shin is not dead yet. The sword that is on Kim Shin’s chest cannot be revoked, which means he will continue to live with the sword stuck in his chest. He can only die if the sword in his chest is pulled out. And comes Ji Eun Tak, the girl who is destined to be Goblin’s bride and the only person who can take the sword off Kim Shin’s chest and make Kim Shin go quietly. Kim Shin falls in love with the bride Goblin, Ji Eun Tak this first love Kim Shin from 900 years old he lived and Eun Tak fell in love with Kim Shin. Ironically, if Eun Tak pulls the sword from Kim Shin’s chest, she will lose Kim Shin. On the contrary, if Kim Shin’s sword is not pulled out, Eun Tak’s life will be threatened because her destiny was born into this world just to be a Goblin bride who pulls out the sword on Kim Shin’s chest.

The drama Bubblegum played by Lee Dong Wook and Jung Ryeo Won and aired on tvn with 16 episodes. The story is about Park Ri Hwan (Lee Dong Wook) who falls in love with a girl he already considers a brother and is cared for by his own mother since Kim Haeng Ah’s father (Jung Ryeo Won) dies. While Ms. Park Ri Hwan has a special relationship that is difficult to define with Kim Haeng Ah’s father. Automatically the mother strongly opposed the relationship of both of them, until finally the mother suffered from senile dementia disease that made her forget to forget about all her memories. Here the people close to the mother are determined to make beautiful memories for the mother. In addition, the conflicts that occur also vary as ex-lover Haeng Ah who requested to reunite, or his friend’s doctor Ri Wan who wants to return with his ex Tae Hee. There is also a rich dentist who falls in love with Park Ri Wan.

Blade Man is a South Korean television series of 2014, starring Lee Dong Wook and Shin Se Kyung. The television series is broadcasted by KBS2 in 2014 with 18 episodes. The story of Joo Hong Bin is the CEO of a well-known game company, rich people, got everything. In addition to Rich and popular he is also a very handsome man. Even though he is perfectly close to what he has. He has one drawback that makes people hesitate to approach him. Joo Hongbin crabby! The worst person on the planet. But he has a reason to be cold and angry because he was hurt after being abandoned by his lover. So one day that arrogant man turned into a giant. When it rained, he became angry and some knives came out of his body. One day he meets a beautiful woman with a bright personality named Son Se-Dong. The girl also promised to try to help heal the wound hearted Joo Hong Bin and make the man becomes a real man.

‘Hotel King’ is a hotel-themed drama that aired in 2014 on the MBC channel. Starring popular actor as the ‘Angel of Death’, Lee Dong Wook. Then there are other veteran stars, such as Lee Da Hae, Im Seol Ong, Lee Deok Hwa, and many more. Lee Dong Wook plays Cha Jae Wan, a general manager at the cool-headed Ciel Hotel who tries to cover up his childhood sadness of being abandoned by his father. In this drama he co-acted with actress Lee Da Hae, they once worked together in the drama ‘My Girl’. Lee Da Hae plays the role of Ah Mo Ne, the only heir of Ciel Hotel. ‘Hotel King’ begins with the story of a little boy begging on the American streets named Jayden (Lee Dong Wook). One day, Jayden accidentally killed his own boss and met Lee Joong Go (Lee Deok Hwa). Jayden knows his true identity as the successor of a seven-star hotel in Korea called Hotel Ciel and has been abandoned by his father. After that, he is determined to get revenge.

April 7, 2017 Tri Comments Off on Things That Hallyu Stars Are Hiding?
MOVIE VIDEO