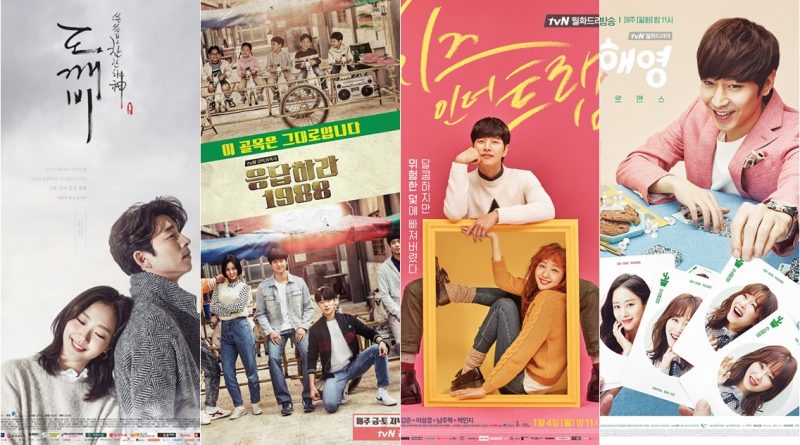 tvN is a cable tv channel that is famous for producing high-quality dramas. Although the show airs on cable tv, apparently the popularity of tvN dramas able to compete with other terrestrial channels. By the end of 2016 to early 2017, tvN shocked viewers with the emergence of the drama ‘Goblin’ that caused a syndrome everywhere. Not only in Korea but also almost all of Asian countries. However, there are other good dramas airing in tvN. Well here are 4 popular tvN dramas which get high ratings.

This drama tells about Kim Shin, a warlord from Goryeo in the days of the empire first. Kim Shin’s boldness makes Goryeo’s young king Wang Yeo feel jealous that Kim Shin’s position is more respected by his people. Wang Yeo is also the husband of Kim Sun (sister of Kim Shin). And this situation makes Kim Sun dilemma, she is confused whether to side with her husband or her brother. Finally this hatred Wang Yeo made him have a wicked plan to get rid of Kim Shin. Kim Shin was stabbed with a sword by his own king and exiled. Apparently, Kim Shin is not dead yet. The sword that is on Kim Shin’s chest cannot be revoked, which means he will continue to live with the sword stuck in his chest. He can only die if the sword in his chest is pulled out. And comes Ji Eun Tak, the girl who is destined to be Goblin’s bride and the only person who can release the sword from Kim Shin’s chest and make Kim Shin go quietly. Kim Shin falls in love with the bride Goblin. Ji Eun Tak becomes the first love Kim Shin from 900 years old he lived and Eun Tak fell in love with Kim Shin. Ironically, if Eun Tak pull his sword from Kim Shin’s chest, he will lose Kim Shin. On the contrary, if Kim Shin’s sword is not released, Eun Tak’s life will be threatened because her destiny is to be a Goblin bride who releases the sword in Kim Shin’s chest.

The drama series ‘Reply’ is one of the tvN projects. The series is famous for producing quality work and finding new stars in the ranks of its players. From the existing ‘Reply’ series, all three have the same format. Spectators are invited to guess who the husband of the female lead by way of flashback to the past. Reply series consist of ‘Reply 1997’, ‘Reply 1994’, and ‘Reply 1988’. The year in the title is also the setting for plot in the drama. Reply series is not only about love of men and women, but there are also elements of friendship and kinship that makes the audience stirred. Therefore, Reply series cannot only be enjoyed by teenagers, but also every one. Because of the setting, the production team has painstakingly created an atmosphere that looks old and makes viewers nostalgic. The last reply series ‘Reply 1988’ which aired in 2015 became the second highest rating of tvN and caused various praise and controversy at the same time.

In third place is Cheese in the Trap. This drama is a webtoon adaptation of the same title that was serialized by Naver in 2010. The characters played by Park Hae Jin as senior Yoo Jung becoming very popular among women. The story itself depicts students’ lives exposed to reality. Talking about the romance of a student named Hong Seol (Kim Go Eun) and her senior on campus Yoo Jung (Park Hae Jin). Due to family background, Hong Seol had to work part-time. While Yoo Jung is a rich man’s son who is handsome, smart, and has a good personality. But Hong Seol realizes there is another side of Yoo Jung that is creepy. Once, Hong Seol’s life on campus became like in hell when she was dealing with senior Yoo Jung. The longer, Yoo Jung begins to feel interested in Hong Seol and turns 180 degrees. From the original often bothered her, but then he became a sweet figure. Seo Kang Joon who became a rival in the love of Park Hae Jin acts as Baek In Ho. In addition, Lee Sung Kyung and Nam Joo Hyuk helped enliven this drama.

‘Another Oh Hae Young’ starring Eric Mun (Shinhwa), Seo Hyun Jin, Kim Ji Seok, and Ye Ji Won. The story of Park Do Kyung (Eric Mun) sabotaged the career of a talented young entrepreneur named Han Tae Jin (Lee Jae Yoon). In a cunning way, Do Kyung makes the man’s business suddenly plunge in, the investors withdraw their support, even Han Tae Jin is thrown into jail and forced to cancel his wedding plans. Do Kyung does all that because the candidate who was originally going to marry Tae Jin, a woman named Oh Hae Young. From his best friend, Do Kyung gets word that Oh Hae Young, his former fiancé who had left Do Kyung out on the altar, has been in contact with another man and intends to get married. However an incident reveals Do Kyung that he has ruined the life of a woman named Oh Hae Young.