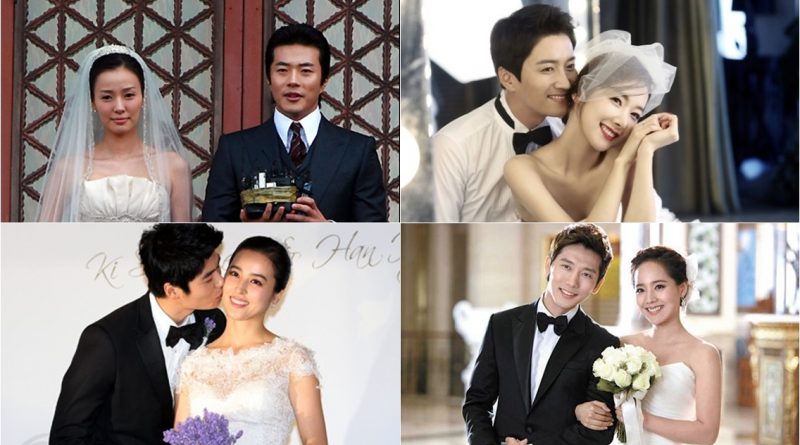 Han Hye Jin got married to soccer player, Ki Sung Yong. They enrolled theur marriage after completing the photo shoot for pre wedding. Finally the wedding document has been fulfilled on June 24, 2013. But the closed wedding held at the new Intercontinental Hotel took place July 1, 2013. Both met at the Doosan Asian Dream Cup in 2010 and dated January 2013. After marriage, Sung Yong went directly to England to prepare a winter match at the time and Han Hye Jin following after completion of filming ‘When A Man Loves’.

Kim Yoo Jin (Eugene), married actor Ki Tae-young, at church, in Anyang City, Gyeonggi Province, South Korea. He appeared in a white dress with an open shoulder designed by Monique Lhuillier. The couple Kim Yoo Jin and Tae-young, born March 3, 1981, first met when they starred in the drama series Creating Destiny in 2009. Then, in Meil 2011, the couple shocked their friends and fans, when they announced that will marry. While playing in a single drama title, the two often go to the same church. They also take a walk to various entertainment venues or shops with wearing hats and sunglasses. However, their dates do not get stuck in the media, so the relationship between them seems to be confidential. After 3 years of marriage, both are gifted the first daughter named Ro hee in 2015.