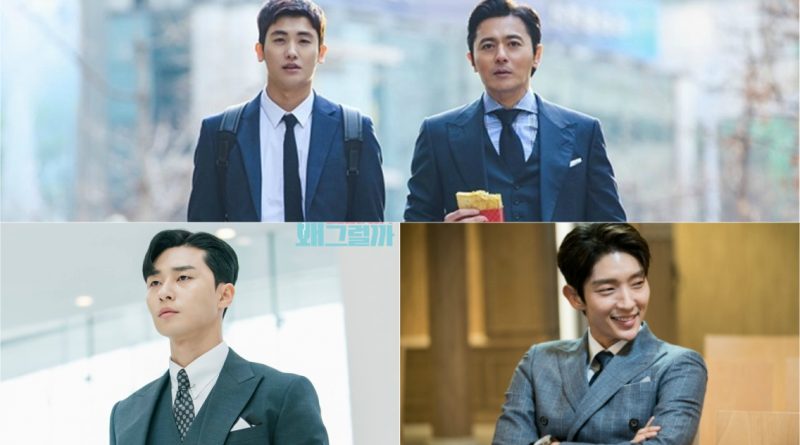 An intense competition between a man in suits in drama starting from Jang Dong Gun and Park Hyung Sik from KBS ‘Suits’, Park Seo Joon ‘Why Secretary Kim?’, and Lee Joon Gi from tvN ‘Lawless Lawyer’ has begun.

Jang Dong Gun and Park Hyung Sik appeared in the drama ‘Suits’ as the lawyer who always wear a classic yet casual suits. Jang Dong Gun is the perfect lawyer that has everything meanwhile Park Hyung Sik is the fake lawyer that has the amazing ability and gift. The two of them not only often seen wearing navy blue suits but also another colors. Jang Dong Gun even wear a vest inside his suit to make a perfect look of his character. They also wearing a matched Shirt and ties with variety colors and pattern.

Lee Joon Gi’s newest drama ‘Lawless Lawyer’ is set to air on 12th of May and revealed the tough looking man in his suits as its main character. He was wearing a suit to cover his identity as an ex gangster who uses fists over law. When he is working as the lawyer, he also often wearing a pair of suit with double breast button that gives off a classical presence of style as he matched it with the white shirts and plain ties. In every action scene, he showed his toughness through the look of not wearing the tie.

Park Seo Joon showed off a second generation chaebol style of his. He play the role of a vice chairman of a big company in his newest drama that is set to air on June entitled ‘Why Secretary Kim?’. He used to wear a pair of suit with dark colors that matched his vest to showed his style as the second generation conglomerate in suits. Meanwhile, a lot of updates from the drama that has been relased made all the female viewers put a high expectation especially after the teaser video of Park Seo Joon was released.