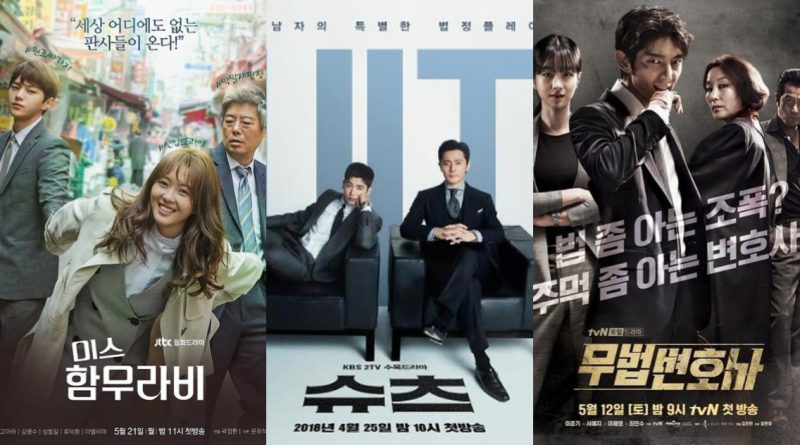 Recently legal-themed drama with various color taking over the small screen. These drama successfully captured the viewers attention through the same themed but different kind of charms.

First of all, KBS drama entitled ‘Suits’ which adapted from the popular American TV series. Drama ‘Suits’ has been the talk of the town and it told a story of a legendary lawyer in the top nation flaw firm working together with a new fake lawyer with an amazing memories. The combination of Jang Dong Gun and Park Hyung Sik successfully gained a lot of viewers attention.

Eventhough this drama has its set in the court room, this drama completely gives off a different charm. Choi Kang Suk (Jang Dong Gun) a lawyer who has a good eye on judging people will meet Go Yeon Woo (Park Hyung SIk), a young man who has a strong ability to remember anything that simply adds the thrill to this drama. This drama showed the reality of a life in the court room and has been gaining a lot of support and love from the drama fans.

tvN’s newest drama ‘Lawless Lawyer’ that aired for the first time on 12th of May told a story of a lawyer who ignores the laws and use his own way to fight for justice and the powerful people who hides their wrongdoings behind their authority. Actor Lee Joon Gi, Seo Ye Ji, Lee Hye Young and Choi Min Soo are all ready to show their best performances in this drama.

Bong Sang Pil (Lee Joon Gi) and Ha Jae Yi (Seo Ye Ji) both are very interesting characters. Bong Sang Pil is now turning into a lawyer because he wants to avenge the death of his mother and he was previously a ganster.

Last but not least is the legal drama entitled ‘Miss Hammurabi’ that will air for the first time on 21st of June in JTBC. This drama has gained a lot of viewers attention through its line up Go Ara, Kim Myung Soo and Sung Dong Il. Sung Dong Il and Go Ara who reunited again since ‘Reply 1994’ has captured the viewers attention.

Furthermore, MBC drama entitled ‘Investigation Couple’ that aired for the first time on 14th of May is a drama about forensic investigation that successfully captured the viewers heart. Also SBS will release it’s newest drama ‘Dear judge’ that is set to air soon and will definitely add the collections of legal-themed dramas.