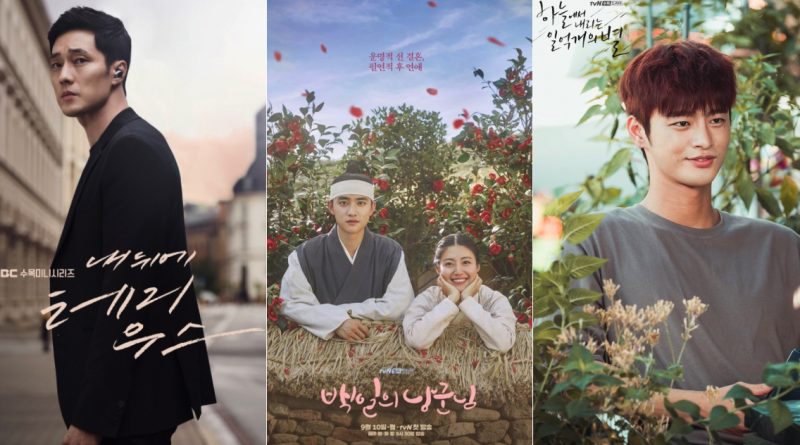 There are a lot of Korean dramas that will dominate the main screen in the second half of this year. The line ups of the attractive main leads such as Park Bo Gum, Song Hye Kyo, So Ji Sub, Hyun Bin to Lee Je Hoon has make the viewers expectation high.

Starting from the remake of the popular drama to the webtoon adaptation drama, these are dramas that ready to air from September.

The member of group idol EXO, D.O will greet the viewers through his first challenge in historical drama. He will play the role of the crown prince who turned into a common people named Won Deuk and he will fell in love with the eldest daughter of the noble family named Hong Shim (Nam Ji Hyun).

This drama is a romantic comedy drama with combination of fantasy and the set of Joseon Dynasty. Won Deuk’s appearances which changed from the noble crown prince to an ordinary man has make the viewers put a high expectation on this drama. This drama is set to air for the first time in September 10th at 9.30pm local time to replace ‘Let’s Eat 3’.

This drama is the remake of the popular Japanese drama with the same title ‘100 Million Stars Falling from the Sky’ and it will greet the viewers real soon.

MBC ‘Terius Behind Me’

PD Pyo Min Soo who is known for his works such as ‘Full House’, ‘Worlds within’ and ‘The Producers’ is now return with his new work called ‘The Third Charm’. This drama tells a love story of a young couple for 12 years as they spent the spring, summer, autumn and winter together.

Actor Lee Je Hoon will return to greet the viewers through the main screen. This drama will replace ‘Thirty but Seventeen’ and it tells a story of a people who worked in Incheon Airport as they struggle with their life and their love.

Drama ‘Boyfriend’ has become the talk of the town since the news of Song Hye Kyo and Park Bo Gum as the main leads broke out and it has confirmed its air time in tvN in November this year. Kim Jin Hyuk (Park Bo Gum) is an ordinary man who has a simple happiness as he will meet a woman who is a daughter of the rich politician who can ’t live her life the way she wants. This drama is a work of the writer of ‘Ddanddara’ Yoo Young Ah and PD Park Shin Woo who is known for his work such as ‘Jealousy Incarnate’ and ‘Angel Eyes’.

May 31, 2017 Tirta Comments Off on Seolhyun is Named as May’s Top Female Model for Ads
DRAMA VIDEO