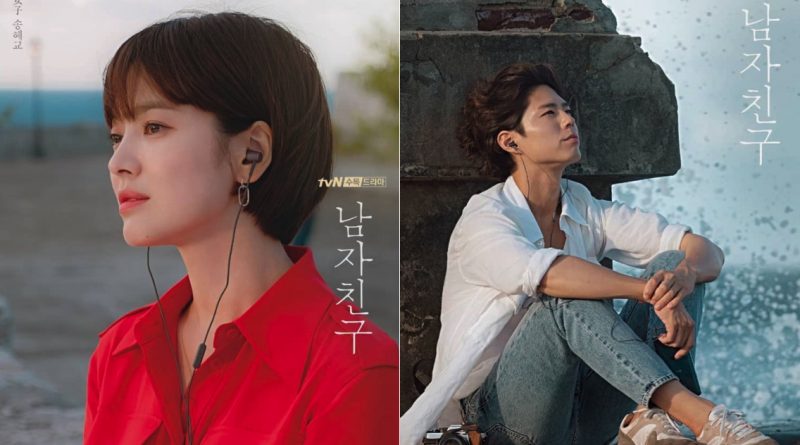 How will the chemistry between Song Hye Kyo and Park Bo Gum who will meet as lovers in the drama ‘Boyfriend’ turn out?

Before its first broadcast, the drama ‘Boyfriend’ has released a character poster of Song Hye Kyo and Park Bo Gum that showed each of their character’s charm that has successfully captured the viewers attention.

In the poster, Song Hye Kyo caught the viewers attention by wearing an earphone. She was seen wearing a red colored shirt with a slightly vague and emotional expression and also a mysterious gaze that made the viewers curios on her character.

Park Bo Gum captured the viewers attention through his free-spirited looking appearance. In the poster he was seen sitting with wind blowing through his hair and he was wearing a simple white long sleeves shirt, jeans and sneakers that showed off his free-spirit.

Through the poster, it showed the conflict of each of characters and the meeting of the two are worth to wait for. The love story between Song Hye Kyo and Park Bo Gum who has a completely different live and colors made the viewers put a high expectation on this drama.

This drama is set to air for the first time in 28th of November at 9.30pm local time.

July 24, 2017 Tirta Comments Off on [RANK AND TALK] 3 Idol Groups with the Most Members
Rank&Talk STAR