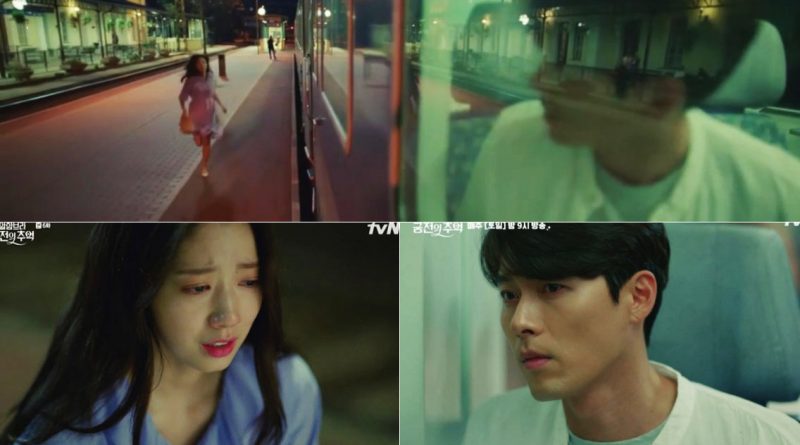 Hyun bin left Granada to ran away from something meanwhile Park Shin Hye tearing up upon his departure.

Yoo Jin Woo (Played by Hyun Bin) was seen leaving Jung Hee Joo (Played by Park Shin Hye)’s side in the recent episode of tvN drama that airs every Saturday and Sunday called ‘Memories of Alhambra’.

After getting his consciousness back and opened his eyes, he went to the hostel where Jung Hee Jo was and Yoo Jin Woo asked Jung Hee Joo to find the smart lense. When he realized that he was being followed by Cha Hyung Suk, he decided to wear the lense and log into the game.

Yoo Jin Woo left the hospital and stayed in the villa where Jung Hee Joo keep him on guard and take care of him. Meanwhile, Jung Hee Joo left the villa to go to her friend’s birthday party, Yoo Jin Woo who was left alone felt completely nervous. Then later he told his secretary, Seo Jung Hoon that he needed to leave Granada as soon as he could.

After knowing that Yoo Jin Woo was about to leave, Jung Hee Joo took the taxi and ran to the Granada station but sadly she couldn’t meet Yoo Jin Woo. Yoo Jin Woo who was inside the train said, “I ran away from Granada with fear. I couldn’t think of other’s feeling” then Jung Hee Joo was seen running after the train before she gave up and ended up crying on the platform.

Finally Yoo Jin Woo and Jung Hee Joo are expected to meet again in Seoul that made the viewers curios on how their story will be unfold in the future.

June 9, 2017 Tirta Comments Off on Bigbang’s TOP is Found Unconscious After Tangled Up in Marijuana Controversy
STAR VIDEO