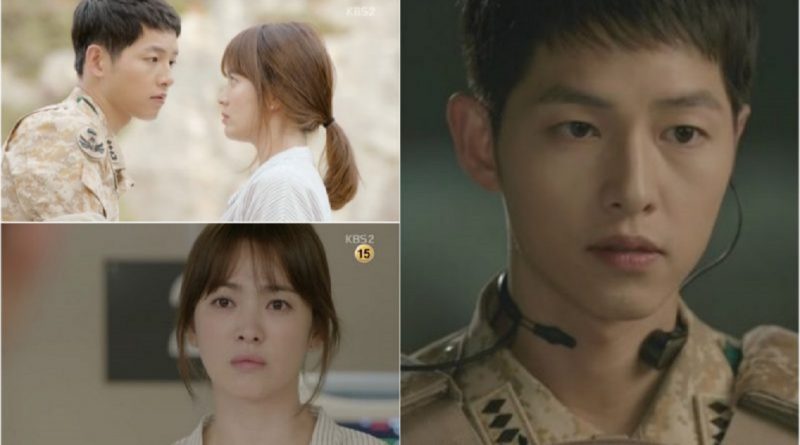 After seeing Yoo Shi Jin (Song Joong Ki)’s various maneuvers to tease Kang Mo Yeon (Song Hye Kyo), in the second half of third episode, we could see how Shi Jin and Mo Yeon started to rekindle their good relationship.

In the car, Mo Yeon asked Shi Jin to why he was sulking. Shi Jin said it was because sergeant Dae Young has been assigned back to Korea.

A flashback scene was then showed, displaying the start of Dae Yong and Myeong Joo’s love story. However, their relationship did not go well because it was not approved my Myeong Joo’s father, a commander of the forces.

It turned out that Shi Jin was taking Mo Yeon to a secluded beach, where he gave a round shaped stone to Mo Yeon. According to local belief, if someone keeps a stone from that beach, then they will be able to go back to the beach.

The whole situation got worse. At Mo Yeon’s promise to save the president, Shi Jin ordered his forces to guard Mo Yeon’s team while they did the operation. The scene was very intense, since what Shi Jin did was actually a violation of order.

July 4, 2017 Ria Comments Off on Reasons of Kim Soo Hyun and Suli Choosing Movie ‘Real’ and Supports from Other Stars
MUSIC VIDEO

August 28, 2017 Ria Comments Off on Hyuna Makes A Comeback This Summer!