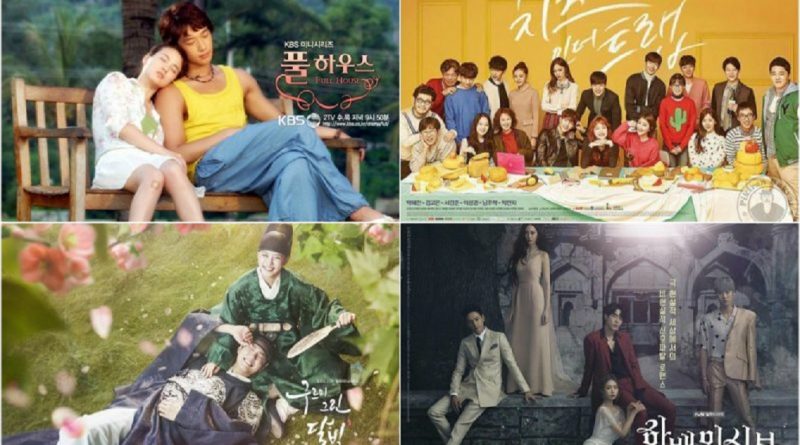 Full House is a drama adapted from Won Soo Yeon’s manhwa with the same title, Full House. It is about a less successful scriptwriter named Han Ji Eun (Song Hye Kyo), who meets Lee Young Jae (Rain), a famous actor. For some reason, Han Ji Eun (Song Hye Kyo) and Lee Young Jae (Rain) then do a contract marriage but slowly, the two begin to realize that they have feelings for each other. This romantic-comedy drama aired on the KBS channel in 2004 and earned a very high rating because of its compelling story and famous actors that are starred in it.

Cheese In The Trap

It is a Korean television series aired in 2016 based on Soon Ggi’s webtoon with the same title. Initially, the Cheese in The Trap webtoon was released through Naver in 2010 and later was made into a 16 episodes drama which was aired on tvN. It is about the romance between a student named Hong Seol (Kim Go Eun) and her senior named Yoo Jung (Park Hae Jin). In addition to being a student, Hong Seol (Kim Go Eun) also works as a part-time worker because of the financial problems that she has. While Yoo Jung (Park Hae Jin) is a senior who has a handsome face, athletic body, and a good personality, but he has a dark side that is not known to anyone.

KBS drama that aired in 2016 was originally a comic book written by Yoon Yi Soo published via webtoon. This drama is set in the era of the Joseon Dynasty of the 19th century. It is about a girl named Hong Ra On (Kim Yoo Jung) who disguised herself as a man. Every day, she earned money by working as a romance consultant. One day, she ends up as a royal eunuch and gets stuck in the castle. Inside the palace, she meets the crown prince named Lee Yong (Park Bo Gum) who is the heir to the royal throne. Hong Ra On then falls in love with the crown prince who does not know that she is actually a woman.

Bride of The Water God

Starting from a manhwa of 24 volumes and 176 chapters, Bride of the Water God was then made into a drama and aired on tvN in 2017. This manhwa written by Yoon Mi Kyung has been published starting in 2007 to 2014. ‘Bride of The Water God’ tells a story about Soah, a girl from a small village who has to marry the water god in order to placate an angry god which caused a long drought. Soah then was sacrificed by the village so that the rain will pour from the sky again. Although the story in the drama is slightly different from the original manhwa version, the character of Soah (Shin Se Kyung) and Habaek / Water God (Nam Joo Hyuk) are still there, however, the background is slightly different as it uses Seoul in the present day.