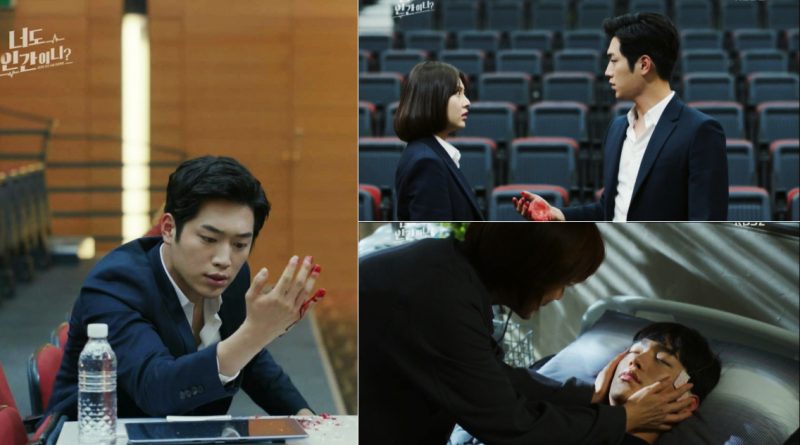 An expected reverse has happened again in the KBS drama that aired in 16th of July and that is none other than ‘Are You Human too’. Nam Shin (Seo Kang Joon) who was still in coma is now has been replaced by the smart humanoid robot Nam Shin III (Seo Kang Joon).How will Nam Shin make his comeback?

Nam Shin who is currently in coma because of the accident in the Czech Republic turned out to be completely aware and listening to everything that happened around him, even he knows that Nam Shin III is a humanoid robot that was made as his copy. Hating the fact that he was being replaced, Nam Shin told himself to a monologue that “Try to pretend to be me. when I wake up, everything will be over” he said.

Nam Shin finally moved his fingers as a sign of hope. Oh Laura who came after hearing the news later broke into tears next to Nam Shin’s bed. After she calmed down, now she is worried about Nam Shin III and So Bong.

So Bong who accidentally knows the truth about human Nam Shin feeling angry and asked Oh Laura to tell Nam Shin III that the human Nam Shin has woke up. Despite that, Nam Shin III who still doesn’t know what will happen to him makes So Bong pity him for being emotionless. Later she ran to Nam Shin III who is currently checking the content before the important PT and told him “You aren’t supposed to be here” and confessed, “I Like you, I like everything about you” she said.

Nam Shin III seemed taken aback by So Bong sudden confession. Then Seo Jong Gil barged into the conference room and pointed at Nam Shin III while saying “The monster which is sitting there is not real. He is a robot that was made resemble to the director” he said.

Now the plot-twist has begun. As he stared at Seo Jong Gil, Nam Shin III suddenly broke the glass on the table and started to bleed just like human being. Then later he said, “Have you never seen a person bleed before?” he said. He then looked at So Bong who was still in shock and said, “you said you like me? who do you think you are?”. It turned out that the man in the conference room is not Nam Shin III but the real human Nam Shin.

February 3, 2018 Tri Comments Off on 4 K-POP Idols Who Are Famous As ‘CF Queen’
BEAUTY Rank&Talk