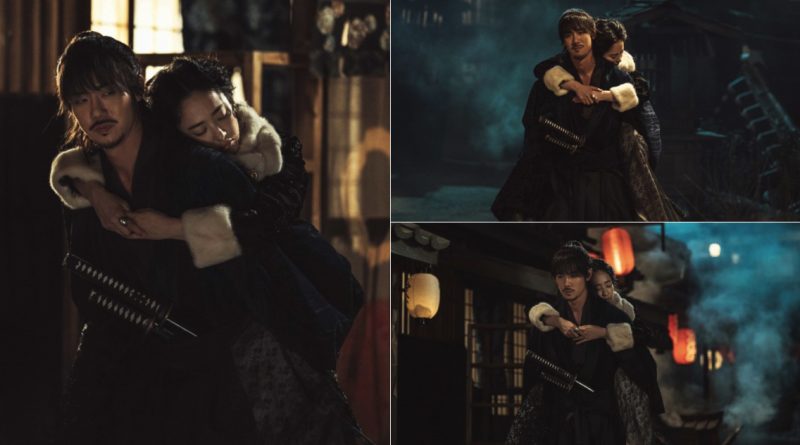 In the tvN drama ‘Mr. Sunshine’, Yoo Yeon Suk played the role of Goo Dong Mae, the lader of the black samurai organization in Joseon and Kim Min Jung played the role of a beautiful woman who is an owner of the glory hotel named Kudo Hina. Goo Dong Mae who is still grieving on the death of his parents and Kudo Hina has to face her own father Lee Wan Ik that has captured the viewers attention.

In the latest episode that aired, Goo Dong Mae was seen getting into the house of Lee Wan Ik and saved Kudo Hina from the danger.

In the 13th inning of this drama that will air in August 18th, Yoo Yeon Suk was seen walking down the street in the middle of the night along with Kudo Hina on his back that made the viewers curious. The released still cuts showed Goo Dong Ma who was walking and giving a piggyback ride to Kudo Hina. Unlike the normal situation where the two of them would talking to each other, in the picture, Kudo Hina was seen exhausted with her eyes shut closed on Goo Dong Mae’s back meanwhile the expression on Goo Dong Mae’s face is slightly unreadable.

The production team of this drama state dthat “There is an atmosphere that made the viewers feel sad and the empathy whenever seeing Kudo Hina got jealous over Ae Shin’s affair” and “These two characters will develop and the two of them will get into a relationship that is more tenacious and more intense than a friend.”.

Meanwhile, the 13th inning of ‘Mr.Sunshine’ will air in August 18th at 9pm local time.