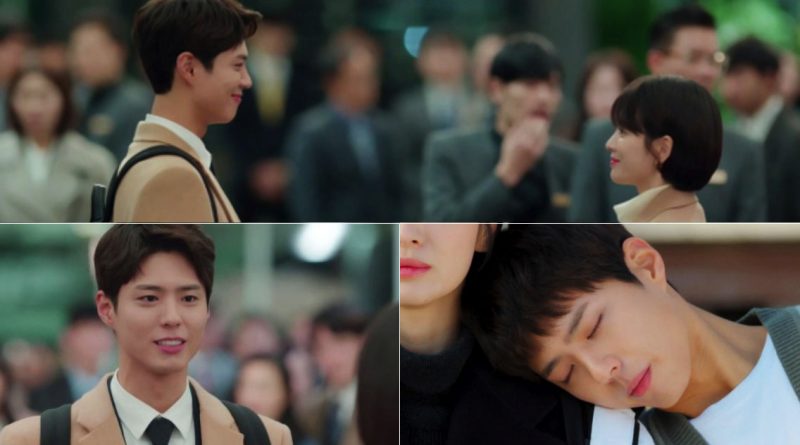 Park Bo Gum in the drama ‘Boyfriend’ showed his magical ending by the end of the episode with a perfect acting.

In the first episode of drama ‘Boyfriend’ Park Bo Gum got accepted to work in Donghwa Hotel and found out that Song Hye Kyo is the CEO of Donghwa hotel after he returned from his trip in cuba. Park Bo Gum was awkward and feel strange to look at Song Hye Kyo who made the viewers put a high expectation on this drama.
By the end of the second episode, the two of them was seen enjoying their ramyun in the rest stop and the innocent face of Park Bo Gum added the suspense in this drama.

In the third episode, Park Bo Gum met Song Hye kyo in Sokcho and made the viewers heart warmed by telling her that “I came here because I want to see you” with his pure smile that has successfully captured the viewers heart with their love story.

In the fourth episode that aired last week, Song He Kyo was having a hard time because of the scandal pictures that were posted in the company’s bulletin board.

On her way back home, Park Bo Gum with bravely stepped forward and called her name, while looking at Song Hye Kyo who tried to look as calm as she could in front of her co-workers.

Then Park Bo Gum narration started with “I have decided. I decided to take a step forward close to your world where you stand alone. Don’t ask me what I’m feeling. I don’t know yet. I will never leave you alone now” said the narration that exposed his sincerity towards Song Hye Kyo. He ended the episode with the pure heart of Park Bo Gum.

Park Bo Gum who successfully portrayed the role of Kim Jin Hyuk since the first episode of ‘Boyfriend’ continue giving the magical ending with his perfect acting skill in each of episodes of this drama.

July 2, 2018 Tri Comments Off on 3 ‘Second Lead’ Couples Who Have A Strong Chemistry
FOOD Rank&Talk

March 15, 2017 Tirta Comments Off on ‘Man to Man’ Has Finished Shooting